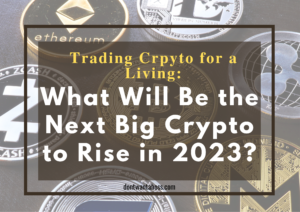 Cryptocurrencies may have begun as a revolution in traditional financial and economic markets, but since their mainstream adoption, this investment class has risen to the top of the investment pyramid.

Which will be the next big crypto to rise in 2023?

If you’re thinking about choosing the best cryptocurrencies to trade, you could be curious to know which one will provide the best potential return. Even though Bitcoin might be the obvious pick, it’s not always the best one in 2023. A smaller coin that hasn’t already been pumped up by institutional investors, may offer a better chance of a large payoff.

Solana is a fully efficient open-source project that leverages the permissionless nature of blockchain technology to provide decentralized finance (Defi) solutions. While the idea and initial work on the project began in 2017, the Solana Foundation with headquarters in Geneva, Switzerland, officially launched Solana in March 2020. The circulating supply is 319,790,577 SOL coins, and the optimum supply is unknown.

Ethereum, also known as Ether, is the world’s second-largest cryptocurrency after Bitcoin, occasionally outperforming it. Last year, Ethereum implemented a significant upgrade that included minimizing the supply of Ether, which is now at 122.2 million coins as of September 2. The upgrade also enables the Ethereum network to process more transactions per second, improve platform scalability, and reduce transaction fees.

The Ethereum blockchain is used by numerous metaverse projects, including Star Atlas, Axie Infinity, and The Sandbox, as well as by the majority of NFTs.

Tether is a type of “stablecoin” that is linked to another asset and is intended to serve as a less volatile alternative to Bitcoin. In the case of Tether, that asset is the US dollar. In terms of valuation, Tether typically has a one-to-one relationship with the dollar, implying that it is less volatile than cryptos like Bitcoin and Ether — the operative word being “usually.”

Tether is the biggest stablecoin and the third-largest coin overall, with a market cap of $66.32 billion. It is also the most traded stablecoin — cryptocurrency investors use it to hold funds or conduct transactions with funds that they want to protect against price swings that Bitcoin, Ether, and other non-stable cryptocurrencies are prone to.

Decentraland is an Ethereum blockchain-based virtual reality game that uses the MANA token as in-game currency. Users can buy goods and services, buy land, visit other players, and establish and generate more revenue from their own content. MANA’s price of $0.7899 on September 2 represents a 31% increase from its 52-week low of $0.6018 — and an almost 87% decrease from its 52-week high of $5.90.

In terms of market capitalization, MANA is the second-largest gaming cryptocurrency. Although it faces competition from The Sandbox and ApeCoin, and in-game assets are rather expensive — land parcels recently listed on Blockee start at around $3,000 — the token has some advantages that could propel it forward.

To improve the user experience, the tokens collaborate with smart contracts. Furthermore, it lowers transaction fees, improves security, and increases transparency. This means that new features are created, tested, and then released to the market. This strengthens the system and eliminates the possibility of bugs.

Avalanche serves as a platform for decentralized applications and custom blockchain networks. It is one of Ethereum’s competitors, with the goal of dethroning Ethereum as the most popular blockchain for smart contracts. It intends to achieve this by having a greater transaction output of up to 6,500 transactions per second while maintaining scalability. It has a total circulating supply of 245,532,531 AVAX coins.

This blockchain platform was launched in 2020 with the goals of being fast, versatile, and affordable. According to reports, this blockchain can process up to 4,500 transactions per second, implying that anyone can access the platform’s code and make significant contributions to it.

Other Important Metrics To Evaluate a Crypto:

Volatility: The less volatile the price, the more likely the cryptocurrency’s value will remain stable.

24-hour volume: The total dollar value of all transactions in the previous 24 hours can help you determine a coin’s liquidity.

Supply: Scarcity can drive demand and prices, as evidenced by Bitcoin’s meteoric rise. Supply that is increasing or infinite can have a detrimental effect.

Where to Look for the Next Big Cryptocurrency

Before determining which cryptocurrency will explode in 2023, it’s important to understand why so many investors are drawn to cryptocurrency in the first place. According to Jeff Dorman, chief investment officer at Arca, a financial services firm that focuses on digital assets, much of it is due to a fundamental shift in how digital assets are perceived.

“I believe we are in the early stages of a multi-decade secular shift towards digital assets, as the evolution from an analog to a digital world has been forever transformed by COVID-19,” Dorman said.

According to him, this asset class has “evolved far beyond cryptocurrencies” to include decentralized finance, NFTs, and other investment vehicles.

Want to learn how to start day trading? Check out Martina’s Learn to Trade & Invest Crypto Academy platform to get access to a complete trading & investing video curriculum, trading resources, our trading community, e-mail support, and 2 Zoom lives with Martina every month. Try it out for 2 weeks 100% FREE!