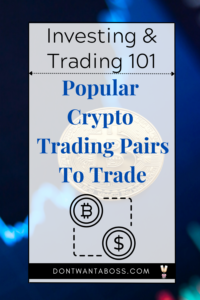 Cryptocurrency trading pairs, more commonly known as trading pairs or just pairs, are arrangements of two different virtual currencies between which users can trade on a cryptocurrency exchange. The most common type of trading pair is Ethereum (ETH) to Bitcoin (BTC), however, there are many other tradable pairs.

Given the recent explosion in popularity and value of cryptocurrency, many are wondering how to get started trading crypto. Though there is certainly no shortage of ways to potentially make money from cryptocurrency, it can be difficult to determine which methods are legitimate and will help traders meet their goals. This article explores 20 of the most popular crypto pairs and should prove helpful in solving this specific investment dilemma going forward.

Learning the various forms of cryptocurrency

Unlike a fiat currency, cryptocurrencies are real money since they behave like it, but they exist only in a digital or virtual form and are not controlled or regulated by any one entity.

There is no need for banks, governments, or any other middlemen, making it a true product of the digital age.

They are secured (encrypted) using specialized computer code known as cryptography, which offers security. They are intentionally made to look like a challenging puzzle in order to be difficult to decipher (and hack).

Which base currencies are more suitable?

Almost everyone who works in the financial industry has heard of Bitcoin. Although from a technical standpoint, this specific base currency is not just the finest, it is one of the best for trading.

Simply said, the majority of individuals want to purchase Bitcoin. Because of this, Bitcoin is the ideal base currency for the majority of pairings. Since BTC is listed on all exchanges, you will have a lot of trading options if it is in your pairing.

Another excellent option for trading pairs is Ethereum. The Ethereum platform’s smart contracts are the major factor in its almost equal-to-Bitcoin popularity. Due to the high demand for ETH globally, there are numerous cryptocurrencies that you can exchange with it.

The third base cryptocurrency for many pairs is USDT. It only became popular a year ago and is one of the best stablecoins. USDT is used around the world because its exchange rate connects with USD, but it provides all the cryptocurrency benefits. That is why more and more exchanges are adding Tether to their lists.

Today, USDT has the highest 24-hour trading volume and one of the highest liquidities, so you can easily choose it for many pairs.

Altcoins can be thought of as the step-children of bitcoin, even though many altcoins are now worth more than Bitcoin. They’re often created or modified by developers for specific purposes instead of being created by corporations. Altcoins also tend to take on certain characteristics in accordance with the usage purpose they’re developed for, meaning that most altcoins will have a limited number of applications and scopes within which people are willing to use them.

Altcoins are worth looking into for active cryptocurrency investors who are prepared to conduct their research. Cryptocurrency stocks are a better option if you want to make an investment that is the lower risk or takes less time. Even if you choose to purchase altcoins, keep in mind that taking on excessive risk is not advised; as such, they should only make up a modest portion of your portfolio.

What are crypto tokens?

Tokens are created and distributed through an Initial Coin Offering, or ICO, much like a stock offering, in contrast to Altcoins. They can take the form of utility tokens, security tokens (to safeguard your account), or value tokens (Bitcoins) (designated for specific uses).

They serve more as a description of a function than as an actual currency. Similar to a U.S. Dollar, they stand in for value but lack intrinsic worth.

Tokens, or long strings of numbers and letters used to represent the crypto utilized in a transaction, like a money transfer or bill payment, are an example of encryption. Tokens, in short, have a variety of meanings.

For instance, crypto including both Bitcoin and Ethereum are considered tokens

The most common types of crypto

Bitcoin is the best-known cryptocurrency in different markets. It has been around since 2009, and it’s the most widely used currency in the crypto world. The name “Bitcoin” is often used to refer to all cryptocurrencies, but there are other types of digital coins out there, too.

The fact that there are only 21 million Bitcoins in existence makes them a very valuable commodity—and that means people might try to steal yours! You need to keep your Bitcoin safe from hackers, thieves, and other evil-doers by using a secure wallet or even storing it offline in cold storage (which means keeping it on an encrypted disk).

Litecoin – Litecoin performs essentially the same as Bitcoin and is frequently used interchangeably with it. Former Google employee Charlie Lee founded it in 2011. With faster transaction speeds, reduced transaction fees, and more concentrated mining, he created it to be an improvement on Bitcoin technology.

Ethereum is a blockchain-based platform that allows users to develop decentralized applications (dApps) and smart contracts. Unlike Bitcoin, Ethereum focuses not as much on digital currency as it does on decentralized applications (phone apps). You could think of Ethereum as a mobile app store. In order to use these applications, you need Ether (ETH), which is similar to Bitcoin in that it can be used to pay for things or exchange for other currencies. However, unlike Bitcoin, ETH cannot be transferred directly between two users. Instead, it must first be converted into another form of currency—for example, Bitcoin or fiat currencies like USD—and then transferred from one user to another via an exchange such as Coinbase or Gemini.

It was founded by Jed McCaleb in 2014, who also co-founded Ripple and Mt. Gox. It’s currently operated by a non-profit organization called Stellar.org.

The network is designed to help developing nations that may not have access to traditional banks or investment opportunities. It doesn’t charge users or institutions for using its network, and covers operating costs by accepting tax-deductible public donations.

Another innovative and profitable cryptocurrency to trade is ripple. To be more precise, Ripple is among the first cryptocurrency initiatives, and its XRP token is one of the biggest in terms of market capitalization. XRP can be delivered instantly and directly thanks to Ripple’s on-demand liquidity to convert two different worldwide currencies. In reality, Ripple was first created to make bank transactions more affordable.

With an emphasis on privacy and decentralization, Monero was introduced in 2014. This cryptocurrency is frequently referred to be the sole true privacy coin. Monero transitions, for example, cannot be made public like Dash transactions. No one knows the history of the coins, making it impossible to determine the origin and finality of transactions.

Numerous merchants from all over the world are drawn to Monero because of its potential and distinctive structure.

How to choose the best cryptocurrency trading pairs

When you’re trying to pick the best pairs for your cryptocurrency, there are a few things you should keep in mind.

You need to know why you’re buying the currency. Have a goal for your purchase and stick to it! If you’re only buying it because of a rumor that someone might be interested in buying it from you later, then don’t bother.

Look at the market cap (market capitalization) of each cryptocurrency. A large market cap means that there are a lot of people interested in buying and selling this particular cryptocurrency, which will make it more stable than others and less likely to crash or skyrocket suddenly.

Use an exchange with low fees. The lower the fee, the better! This way, more of your money stays in your pocket instead of going into someone else’s pocket (the exchanges). Also, look for exchanges with good customer service so if something goes wrong or something doesn’t work right away as it should then there’s someone who can help you get things fixed up as soon as possible!

It’s crucial to understand that trading volume and liquidity are two more characteristics that have an impact on any crypto pair’s popularity. As a result, cryptocurrency traders should evaluate several market conditions and data trends, such as market capitalization.

Here, it’s important to note that a high market capitalization translates into a large number of coins in circulation. Top coins like Bitcoin and Ethereum have some of the greatest liquidity rates, which demonstrates real demand.

The risks of cryptocurrency pair trading

The fact that cryptocurrency pair trading is non-directional or market-neutral is its finest feature. Accordingly, pair trading allows you to make money whether the market is rising or falling. Yet, there are several potential risks and drawbacks investors need to be aware of when using this strategy.

Another drawback of crypto pair trading is that because it involves many different markets from all over the world, you may have difficulty keeping track of all your positions at once. You may also have difficulty understanding how each individual market works in relation to others, which can cause problems for those who are inexperienced with this type of trading strategy or do not have enough time available for monitoring their positions 24/7.

The last disadvantage associated with crypto pair trading is that it does not provide an opportunity for diversification between different types of cryptocurrencies like some other strategies do; instead, it focuses exclusively on finding pairs between two specific coins or tokens rather than trying to find any potential opportunity within an entire ecosystem.

Want to learn how to start day trading? Check out Martina’s Learn to Trade & Invest Crypto Academy platform to get access to a complete trading & investing video curriculum, trading resources, our trading community, e-mail support, and 2 Zoom lives with Martina every month. Try it out for 2 weeks 100% FREE!