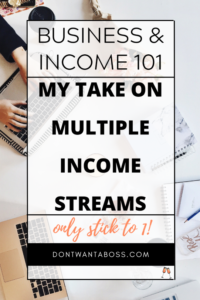 These days, having multiple income streams is rather typical. It’s a way to make ends meet for certain people. Others see it as a method to increase their fortune. It can also help you feel more comfortable financially. If one source of income becomes unavailable, another can be used to replace the void.

If you’re thinking about diversifying your earnings, you might be wondering, “How do I diversify my earnings?” ” It’s actually quite simple, and many of us already have multiple income streams, we simply aren’t aware of them.”

The goal of diversifying your revenue streams should be to optimize your earning potential in each category. It’s unrealistic to expect you to create a lot of rental money when you’re just starting out. If you start optimizing your income-generating potential through your primary pay, you’ll find that you have extra money that you can reinvest to create multiple income streams and earn more money.

I’ve been seeing a lot of videos lately on Facebook Ads and YouTube ads about how so-and-so has built up multiple income streams by the time they’re 20 and how you need to do the same thing now or else you’re going to be poor forever etc. etc.

First of all, I don’t know about you but I hate scarcity marketing like that. Remember that there’s always more than 1 way to do things.

Look at Warren Buffet (yes I know it’s an overused example) but the point is he built his fortune using 1 tactic. That’s it! Just 1.

You don’t need to be doing 20+ things to make a lot of money. It’s enough to do 1 thing really well and you’ll be fine.

Second of all, a lot of income streams are not cheap to build up. It either takes a lot of time or a lot of money to build up a good income stream. If they were easy or cheap, I’m sorry to say but everyone would do it.

Take investing for instance. You can start with 5k sure but it’s going to take a LONG time to build up that 5k to a place where you can live off the profits.

If you’re trying to make money, you’re likely not in a position where you have 20k to put into investing, another 20k into media buying, and all this free time (that you don’t have right now) into blogging.

If you had all that money and time, you wouldn’t be trying to make money from home!

Why I think having multiple income streams isn’t worth it

Whatever source of income you pick, it’s critical to maintain track of your resources and you’re short- and long-term financial objectives.

It might be difficult to keep track of many sources of revenue in a monthly budget. It’s critical to keep track of how much money you invest into the upkeep of your passive income streams, such as property upkeep or monthly online services, in order to be profitable.

I started off blogging with the help of the community I joined in 2015 because I had like no money to start with. I did that for years, made a little bit here and there (not much for a long time!), and learned the ropes.

Then I made a bunch of money actually working a job and I used to start an investment account. That was mostly hanging out in the background until my blogs actually took off and then I was able to really work on investing.

Once I had blogs that were stable and a trading account that was big enough I could consistently be bringing in 500$ a day, only then did I know I had enough money and time to learn media buying.

Pick 1 thing and learn how to do it really really well.

​A lot of time people question the idea of having multiple income streams, especially as they grow their business. However, many people with multiple streams have successes and failures. I’ve had some major wins, but also some big stumbles. But hopefully, this post can help you understand the basics of being successful in this aspect of your business.

Start small and grow your business big time [for FREE]

Blogging, investing and media buying ALL have the capability to provide you will a full-time income independently. What’s your 1 thing right now?