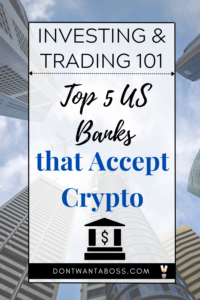 Crypto is emerging as a mainstream currency, and it’s not just beloved by tech companies and retailers. Banks accept crypto in the US and if you live there, you can take advantage of this new trend and use it to buy cryptocurrencies through various platforms such as Binance, CoinBase, & Kucoin.

With all the regulations issued by various countries and banks, I know it might be hard to believe. But if you think about it, some of the large banks have started to accept crypto. Not only that, they even provide their users with crypto wallets as well.

Why don’t some banks accept crypto?

There’s no doubt that cryptocurrency is becoming more and more popular every day. It’s not just for the tech-savvy anymore, either—it’s being used by people across all levels of society. Some businesses have even started accepting it as payment for goods and services.

So why don’t some banks accept crypto? There are a few reasons, but they’re all pretty reasonable ones. Let’s take a look at them.

Since cryptocurrency isn’t backed by any government or fiat currency, it has no intrinsic value—it’s just bits and bytes on a computer screen. That means there’s nothing stopping someone from hacking into your bank account and stealing your money.

Another reason why banks don’t accept cryptocurrency is that it’s just too risky for them to do so. If something goes wrong with bitcoin transactions —like if someone makes an error when sending funds or if there’s a problem with their computer system—the bank could lose all its money.

There’s also the fact that cryptocurrencies can be used for illegal activities such as money laundering or tax evasion, which makes them an attractive target for criminals looking to launder their cash without having it traced back to them.

The volatility of crypto has made banks wary of accepting it as a form of payment for customers, but there are some banks that have decided to dip their toes in the water anyway.

Banks that accept cryptocurrencies have all started pilot programs or small-scale projects where they allow customers to use their Visa cards to purchase crypto through third-party crypto exchanges like Coinbase or Gemini.

Banks in the United States that accept cryptocurrency

The number of US citizens who have started buying, selling, and trading cryptocurrency has skyrocketed in the past few years. In fact, Coinbase is one of the most popular platforms for doing all these things. Ally Bank is one of the largest banks that allows users to purchase Bitcoin with USD and trade it with other currencies, but what most people don’t know is that Coinbase also allows you to link your bank account to their service.

This means that if you want to buy or sell Bitcoin using an Ally Bank-issued debit card, you can do so easily through Coinbase’s interface. But there are some caveats: You’ll need to have some money in your bank account before linking it with Coinbase, and you’ll have to wait at least 2 days before that money shows up on your Coinbase account as available funds for crypto trading or purchasing cryptocurrencies.

Chime Bank is a digital bank that offers mobile and online banking as well as budgeting services. The company is headquartered in Chicago, Illinois, and was founded in 2017 by a team of former Google employees with the goal of making traditional banking accessible to everyone. Chime Bank currently offers checking accounts and savings accounts that can be funded with cryptocurrency.

Chime Bank allows customers to buy bitcoin through Paxful, which is a peer-to-peer marketplace for buying and selling bitcoin. Paxful accepts both cash deposits and electronic payments for crypto purchases. The company also provides an option for a user to get paid in bitcoin from their employer or other third parties. Chime Bank does not charge any fees for any of its services except for ATM withdrawals–these cryptocurrency transactions cost $2.50 per withdrawal at any ATM regardless of whether it’s within the network or not (up to two per month).

Goldman Sachs Bank is one of the best banks in the US and has a new way to accept cryptocurrency.

The bank has been offering their customers access to bitcoin for quite some time now, but they also have a newly adopted altcoin trading desk and altcoin product offerings. This means that they’re not just interested in accepting bitcoin, but also other altcoins like Ethereum and Litecoin.

They’ve even created an entirely new division of the bank that focuses on cryptocurrencies and blockchain technology. The division is called “digital assets” and was created by David Solomon who was recently promoted by Lloyd Blankfein to CEO of Goldman Sachs Bank.

USAA is now allowing its customers to purchase Bitcoin using debit cards issued by USAA. This is a huge step for crypto users in America who want to be able to buy Bitcoin quickly and easily.

The bank has also added support for wire transfers and bank transfers as methods of payment for Bitcoin purchases, which means that if you have a USAA account, you can buy Bitcoin from another person using your USAA debit card.

The bank expects to launch its new crypto-friendly payment system in 2020 but has not yet released any details about it. However, the announcement confirms that JPMorgan is no longer opposed to cryptocurrencies or blockchain technology, which it had previously dismissed as “not real” and “anti-American.” During a CNBC interview in 2017, Jamie Dimon called Bitcoin “a fraud” and said he would fire any employee who traded in Bitcoin. In March 2018, he also said that he regrets calling Bitcoin a fraud because it gave legitimacy to the cryptocurrency market and legitimized people who had no idea what they were talking about.

Dimon has since changed his tune on crypto last 2018, saying that he regretted calling Bitcoin a fraud because it gave legitimacy to cryptocurrencies and legitimized people who knew nothing about them. He also said that JPMorgan might even create its own digital currency someday.

There are a lot of U.S. banks that have explicitly prohibited or limited the use of cryptocurrency. These banks don’t want to deal with the high risk and volatility involved with digital currencies, so they’ve decided not to offer support for them.

Bank of America has banned its customers from using their credit cards to buy bitcoin or other digital currencies through third-party websites like Coinbase. The bank has also banned its customers from buying bitcoin futures with their credit cards on any platform other than its own site. The reason? It’s worried about potential losses due to fraud or hacking—as well as losses due to price fluctuations in cryptocurrency markets!

Wells Fargo no longer allows its customers to trade in cryptocurrencies at all—whether in an online bank or through physical branches—because it considers these activities too risky given their high volatility rates and lack of liquidity levels compared with other asset classes such as stocks or bonds (or even real estate).

Here are other banks that don’t support cryptocurrencies:

What Will the Future of Banks and Cryptos Look Like?

Traditional Banks, cryptocurrencies, and blockchain technology are the future.

We’re living in the age of digitalization, where everything is moving online and technology has become an integral part of our daily lives. The banks have been at the forefront of this digital revolution by adopting new technologies and implementing them into their business operations.

But what will be the future of banking? Will banks still exist in 10 years? Are they going to be replaced by cryptocurrencies? And if so, when will this happen?

It is safe to say that some changes will occur in the next decade but what exactly those changes will look like is hard to predict.

However, there are a few things that we can be sure about: cryptocurrency adoption will continue growing and more people, especially crypto enthusiasts will start using it as a method of payment and crypto investments; banks will continue embracing new technologies and implementing them into their business operations; blockchain technology will become more widespread as it becomes an established industry standard for crypto transactions.

There will be more regulations regarding cryptocurrencies issued by governments around the world as well as stricter policies regarding ICOs (Initial Coin Offerings) from central banks; cyber security measures will increase dramatically due to all these factors combined together.

I think, Cryptocurrency is here to stay and will do a lot of good for the world. The reason I have such an optimistic outlook on the future of cryptocurrency is that I believe in the power of its creator. He may be the most powerful man currently alive.

The creator developed an algorithm capable of being used as money and made it open-source; all this with an Internet connection and not one payment or bribe to any government official — so they’re legal virtually everywhere.

Want to learn how to start day trading? Check out Martina’s Learn to Trade & Invest Crypto Academy platform to get access to all content and resources, our trading community, and 2 Zoom lives with Martina every month. Try it out for 2 weeks 100% FREE!