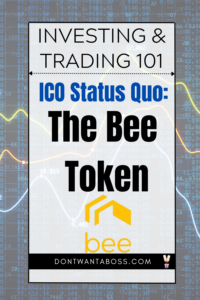 The world has gone digital, and everything is becoming a part of the digital world. Internet technology is spreading like wildfire, and smart devices have allowed an interconnected world. We buy products online, pay our bills online and even manage our finances online these days — that’s where the need for cryptocurrencies or digital currencies came from, like the Bee Token.

The Bee Token (symbol is BEE) ICO has been catching a lot of buzzes lately because of the team behind the project. Former employees from top companies such as Google, Facebook, Uber, and Civic are all collaborating on this project.

The Bee Network is a decentralized, peer-to-peer system that allows people to buy things with their smartphones. One of the most significant drawbacks of cryptocurrencies like Bitcoin is the amount of computational power and batteries required to mine them—the process of validating transactions. You can buy currencies like any other fiat currency on exchanges, but The Bee Token will issue millions of coins every day in small amounts to anyone who simply downloads an app.

The program makes use of crowdsourced location data that is subsequently transformed into tokens. Tokens can then be used to purchase things from shops that accept them using a digital wallet address within the app.

“Beenest” and “Bee Protocols”, like many other ICOs coming out right now such as Gatcoin, are being built on the good old Ethereum blockchain.

The goal behind this project is to disrupt home sharing by making it decentralized and thus commission-free.

Beenest is meant to serve as a home-sharing platform, as far as we can tell it is very similar to Air BnB. The rewards for using the platform include free commissions on transactions, “unrivaled” security compared to other home-sharing platforms (*cough* AirBnB?), and also “network incentives” but they do not elaborate more than that.

The main difference between AirBnB and Beenest, besides being built on blockchain and thus having no middleman commissions and transparency, seems to be the security. The co-founder and CEO of the company is Mr. Jonathan Chou, who is the former leader of Security and Fraud at Uber. So this may explain the reason for tackling this particular market even with Airbnb having such a massive hold on it.

Public Sale: $5 million – January 31st, 2018 with some caveats on having to register first

If you are interested in participating in the token sale, go to the website and join the Whitelist (learn more below). The exact registration dates and crowdfunding dates are there.

Note that the public sale will not be available to the following countries:

They say, however, that they are working on it so that in the future investors from these countries will be able to trade the Bee Token – presumably when it is listed on the exchanges.

In 2017, they completed their whitepaper. They’ve already conducted some testing and intend to launch Bee Protocols on the Testnet (a network used for testing purposes) by the second quarter of 2018. They hope to monitor, optimize and launch it on Mainnet by the end of 2018. (main, functional network). They hope to continue optimizing and expanding up to 5 US cities by 2019, with the final targets being in the countries of London, South Korea, and Singapore.

You can also fill out a form by going to their website in order to be put on the company’s “Whitelist” and give them information including:

The Whitelist seems to constitute a recognition system so that loyal contributors can be recognized and sorted out from the masses (maybe pump & dumpers?).

The Bee Token provides the best chance for people who don’t have any experience in computer science to understand blockchain and cryptocurrencies.

The ICO team does not talk about their plan for listing the Bee Token on exchanges though, so we will have to wait and see what the news is with that over time.

It will be interesting to see how soon Beenest takes off and how AirBnB reacts. It’ll also be interesting to watch how Beenest aims to deal with the security concerns that seem to be an inherent part of home-sharing. We will simply have to wait and see what they have in store for us this year!