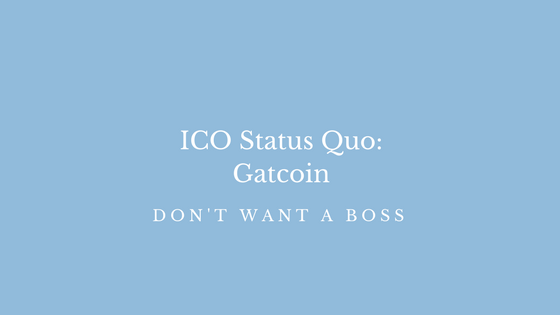 The Gatcoin (symbol is GAT) ICO has exceeded expectations, selling out far before their expected date.

This new idea has the potential to distrupt the shopping market in terms of point collection, promotions and loyalty programs.

The idea behind gatcoin is to allow consumers to keep all of their points, coupons, loyalty program rewards, etc. on one app on their phone. Keeping everything in one spot sounds nice but aren’t there already apps for that? Probably but that’s not all Gatcoin would do.

In addition to having a platform (both app and website platform) where you can store all of your shopping points, etc. in one place, you would be able to exchange these points for Gatcoin – a cryptocurrency. Gatcoin therefore will have monetary value to it so for all of you who have tons of coupons lying around that you never use, you can just exchange them for money!

But again, that’s still not all Gatcoin will do. You can also use your Gatcoin to purchase/acquire points, rewards, coupons, etc. for other companies that may be more applicable to you. So if you’ve got a ton of points for Walmart but you recently switched stores and you never go to Walmart anymore, you can now exchange those points for Starbucks points and get some free lattes instead.

Last but not least, merchants can airdrop currency to users phones by geolocation. So you can be walking by a Starbucks, get some promotional currency airdropped to your app for 25% a latte and walk right in to use that promotion right away.

The idea is to be a win-win for merchants and consumers. Consumers because they can actually use all of their rewards rather than letting a ton go to waste or just ignoring them because they’re irrelevant to them. And merchants because customers will now be more engaged since all promotional content will be useful to them rather than getting annoyed by all the “Spam promotion” they are receiving.

The 2nd week public sale was forecasted to continue until Janury 28th, 2018; however, the hardcap was reached earlier than expected.

The Gatcoin Demo is already live but the software is still in development. With the token sale to raise funds for development already finished, the next step for the company is to finish software with finalized development targeted for December, 2018. They’re also working on getting listed on exchanges with a target date of June, 2018.

Then, this Singapore & Hong Kong based team is starting thier expansion plan in East Asia, then expanding to the US by 2019 and then the Americas and European Union in 2020.

Improved organization, value and better consumer-merchant interactions – these are the goals that Gatcoin is hoping to achieve with their new platform.

It will be interesting to see how the value of different coupons are priced against the value of GAT, how well this technology will be adopted by the target market – the everyday moms and dads – and whether merchants will in fact be excited to implement it.

Although Gatcoin may keep users more engaged, will merchants like the idea of their coupons being exchanged for other businesses? Also, are merchants generally intending for all coupons to be used or is it more of a marketing ploy to increase visibility? Lastly, how will expiry dates work if coupons and rewards can just be exchanged for GAT (which presumably cannot expire)?