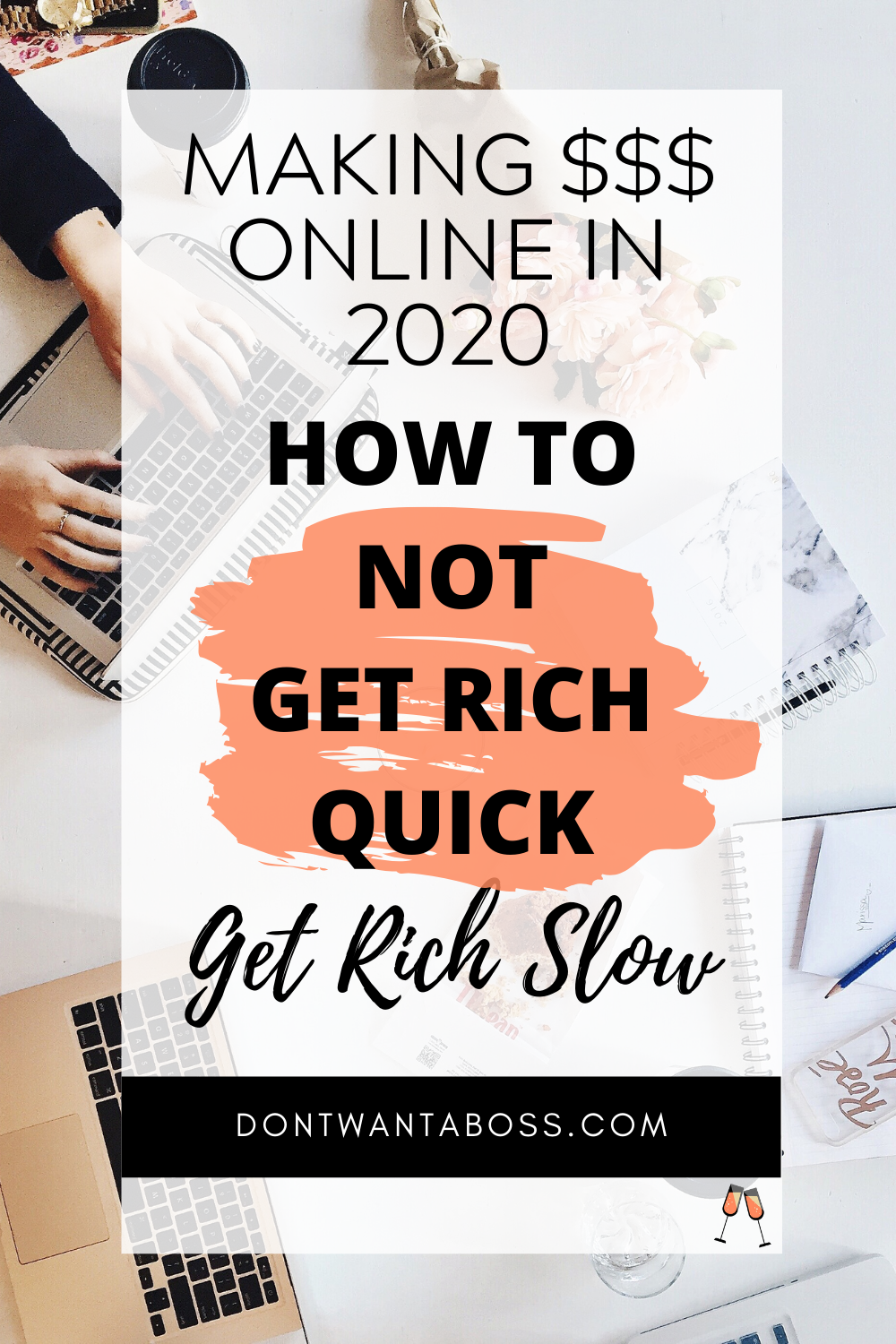 Get rich quick schemes work because wanting to get rich quick comes from a place of vulnerability and desperation in us.

We want to believe that the scheme true because we don’t feel like there is any other way out of the predicament that we’ve gotten ourselves into. Whether you’ve just lost your job or if you in a ton of debt, you feel that you have no way out.

Unfortunatley, it doesn’t help when there’s people all over social media and the internet flaunting how much money they supposedly have. Most of what you see online is not the 100% truth. When you see people with a ton of money that they’ve made online, you think that it happened overnight. Even Warren Buffet took decades to make his fortune! When you’ve finally succeeded, it’s easy to post about it.

No one posts about their struggles because they’re too busy struggling beating themselves up about not being successful yet.

As I’m reading this over, I realize how bitter I sound. I swear that I have more faith in humanity than this.

I guess I’m just sensitive about this particular topic because it’s something that causes a lot of people to 1) loose money they really don’t have, 2) end up hating themselves and 3) give up on a completely realistic dream of earning a side income.

Why People Spend Money that they Don’t Have

I don’t know if this is or has ever been you but it sure has been me. It’s also been a lot of the people I know.

Humans are inherently bad at spending within their means. We generally don’t like to be constrained and are governed much more by our emotions than by the numbers in our account. We also don’t like to think we’re only worth what we make in our day to day jobs.

There’s a reason why everyone wants to keep up with the Kardashians or climb the corporate ladder. You get stuck in the rat race of corporate America because you’re constantly trying to make enough money that money won’t be an issue for you anymore.

You want to be able to do what you want, when you want without thinking about the finances. You want financial freedom and you want it now. Am I right?

This is why we spend money that we don’t have. Inevitably, this puts us in debt and into desperate situations where we’re trying to “get rich quick”. Most people who tell you they don’t want to get rich quick are probably lying.

The sheer number of people who buy lottery tickets are living proof that getting rich quick is a universal desire. The phrase just sounds icky so people don’t want to be associated with it.

Speaking of the lottery, one particular place where people spend money they don’t have is trying to make more money. This comes in many forms:

It’s this last one that I’m going to elaborate on more today. The world of internet marketing is about 95% complete BS and 5% legitimate BUT 100% effective at sucking in people who need money.

If you’re new at internet marketing, then you have no idea how to look out for the red flags of BS. For some people it might be common sense but the 100s of thousands of people who have been scammed online will know that it’s usually not.

Usually, the people who build the BS websites promising quick riches are not obvious about it. They masquerade as real people, people who understand your struggle, people who empathize with you, people who started out in your shoes, people who will help you step-by-step because they sincerely want you to be successful too.

Once they’ve completely won you over using content that they’ve literally tested and perfected on thousands of other people, only then do they show you the price tag of what all that too-good-to-be-true stuff is going to cost you.

You know you can’t afford it but if even half of what that person says is true, it won’t matter what you spend now because soon you’ll be so rich you can pay off all your debts and then some.

You can go on that vacation you’ve always wanted. You can buy your wife or husband that thing you know they’ve been dying to get. You can finally get your dream home or maybe even 2!

At the end of this internal debate, you realize that the price of going into a little bit of debt in the short term is not much of a price to pay at all for all the long-term gains that your new trusty internet friend has promised you.

Why People End Up Bitter and Hating Themselves

You’ve done a TON of work. You’ve followed all the instructions and the step-by-step program that you’re internet friend gave you. You’re down even more money to pay for all the add-ons and extras that you needed in order to follow the program and it’s making you anxious to even think about your bank account right now. You still haven’t made 1 dollar online and you’re starting to get worried.

You decide to take advantage of the support that your online friend promised. They said they would be there every step of the way to help you.

So what do you do now?

You do what so many people have done before you. You give up and start hating yourself for being so stupid. Sometimes it takes 1 online scam, sometimes it takes several. At the end of the day the result is the same.

People who have fallen for scams online generally swear off any kind of online business. Reading that, it seems like the logical thing to do, right?

You might as well resign yourself to a “normal, respectable life” where you work hard 9-to-5 at the office like everyone else in order to pay off your debt.

Why People Give Up on Creating their Own Business

Working full time at a company in an office has the reputation of being a respectable living.

If you’re an employee of a big company, you’re living life the right way according to normal societal views. Working hard at that 40+ hour week (closer to an average of 60 now for most people) is going to make you on average the 75 or 80k per year.

That’s just the way things are.

You have to work hard to earn that kind of money. Also, you can’t just start that kind of job out of high school. Jobs that pay that kind of average salaray take a college degree, they mean taking on debt so that you have an education.

They also mean having previous job experience. So, the amount of effort that it takes to actually start earning 75k+ a year is a LOT before you start getting paid anything at all. In fact, you’re probably taking on a ton of debt first.

The reason most people are okay with this is because it’s a pretty sure thing that if you go to a good university or college and get a good education, you’ll find a well paying job that will be able to support you and your family. You know it’s a sure thing because your parents did it, your friends are doing it or have done it and family members have done it.

How many people do you know personally who have started a successful online business that’s making them 75k a year? Most likely none. So why should you have faith that you can do it to? You need someone to tell you or show you that it’s possible (hence the whole fiasco that I told you about above).

Just like you know that you’ll have to work really hard to get the average 75k a year job because that’s just “how it is”, there’s a reputation that has spread about making money online.

For some reason, everyone thinks that earning money online is 1) easy to do, 2) happens overnight and 3) will make you a LOT of money – like a ridiculous amount. No one ever tries to start a business online with the goal of making 1k a month…it’s always like making a million dollars by the end of the year… I’m not exactly sure why this is but it’s just the reputation of online business.

It’s kind of like an all or nothing nebulous world. Either you “make it” online or you loose a bunch of money trying.

This is simply not the case.

It’s really unfortunate that when people get scammed and don’t make the millions that they were promised by “gurus” they just give up on online business all together. At the end of the day, it is 100% possible to make money online.

It is VERY unlikely that if you start today you will even make 100k within 1 year let alone 1 million dollars.

More likely, you’ll start making a few hundred per month by month 3 or so if you work really hard. I have seen people make 6 figures in 1 year but this is very much the exception and it’s usually people who don’t have another job.

In my experience, it’s usually stay-at-home moms whose kids are already older who can dedicate 6-8 hours a day who can get those kinds of results.

For the rest of us, 6 figures takes years to achieve. That being said, if you can get passed the need to make a million dollars now and just get excited about the prospect of started at a few hundred every month and growing things slowly from there, I can show you exactly how to build your own business from scratch.

What I can promise you (and if for any reason you don’t feel this is genuine, feel free to write a nasty review below):

Ready to NOT get rich quick? Try my #1 Recommended Training to Start an Online Business

What’s been your worst experience online? I’d love to hear it – please share it with everyone below!

2 thoughts on “Get Rich Quick Schemes”