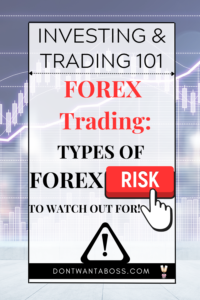 It’s important to remember that banks conduct the vast majority of forex transactions, and they utilize forex to mitigate the risk of currency fluctuation. To manage some of the foreign exchange risks outlined below, they use complex algorithms in their trading systems. Many of these risks can be avoided or limited as a person, while others can be mitigated by smart trade management.

When trading on margin, any investment that has the potential for profit also has the potential for risks, up to the point of losing far more than the value of your transaction. This post will assist you in better understanding the foreign exchange risks so that you can trade with greater confidence.

This is a continuation of the Foreign Market Exchanges topics I’ve written recently. I’ll write down the list of blog posts related to this topic, so feel free to click any one of these:

Now, there are three kinds of Foreign Exchange risks that we will talk about in this article, namely:

It is very important for every trader to implement an effective risk management strategy. So keep these risks in mind and hopefully, you’ll learn how to mitigate risks when you’re finally trading live. Here’s a quick video about the importance of risk management in the FOREX Market:

Exchange rate risk is a consequence of the continuous shift in the worldwide market supply and demand balance on an outstanding foreign exchange position. A position will be subject to all the price changes as long as it is outstanding. In order to cut losses short and ride profitable positions losses should be kept within manageable limits. The most popular steps are the position limit and the loss limit. The limits are a function of the policy of the banks along with the skills of the traders and their specific areas of expertise. There are two types of position limits: daylight and overnight.

The position and loss limits can now be implemented more conveniently with the help of computerized systems, which enable the treasurer and the chief trader to have continuous, instantaneous, and comprehensive access to accurate figures for all the positions and the profit and loss. This information may also be delivered from all the branches abroad to the headquarters terminals.

Interest rate risk is pertinent to currency swaps, forward outrights, futures, and options. It refers to the profit and loss generated by both the fluctuations in the forward spreads and by forwarding amount mismatches and maturity gaps among transactions in the foreign exchange book.

An amount mismatch is a difference between the spot and the forward amounts. For an active forward desk, the complete elimination of maturity gaps is virtually impossible. However, this may not be a serious problem if the amounts involved in these mismatches are small. On a daily basis, traders balance the net payments and receipts for each currency through a special type of swap, called tomorrow/next or rollover.

To minimize interest rate risk, management sets limits on the total size of mismatches. The policies differ among banks, but a common approach is to separate the mismatches, based on their maturity dates, into up to six months and past six months. All the transactions are entered into computerized systems in order to calculate the positions for all the delivery dates and the profit and loss. Continuous analysis of the interest rate environment is necessary t forecast any changes that may impact the outstanding gaps.

the possibility that an outstanding Credit risk is connected with the possibility that an outstanding currency position may not be repaid as agreed, due to voluntary or involuntary action by a counterparty. In these cases, trading occurs on regulated exchanges, where all trades are settled by the clearinghouse. On such exchanges, traders of all sizes can deal without any credit concern. The following forms of credit risk are known:

The credit risk for instruments traded off regulated exchanges is to be minimized through the customers’ creditworthiness. Commercial and investment banks, trading companies, and banks’ customers must have credit lines with each other to be able to trade. Even after the credit lines are extended, the counter-parties financial soundness should be continuously monitored. Along with the market value of their currency portfolios, end-users, in assessing the credit risk, must consider also the potential portfolio’s exposure.

The latter may be determined through probability analysis over the time to maturity of the outstanding position. For the same purposes, netting is used. Netting is a process that enables institutions to settle only their net positions with one another not trade by trade but at the end of the day, in a single transaction. If signs of payment difficulty in a bank are shown, a group of large banks may provide short-term backing from a common reserve pool.

The failure to receive an expected payment due to government interference amounts to the insolvency of an individual bank or institution, a situation described under credit risk. Country risk refers to the government’s interference in the foreign exchange markets and falls under the joint responsibility of the treasurer and the credit department. Outside the major economies, controls on foreign exchange activities are still present and actively implemented.

For the traders, it is important to know or be able to anticipate any restrictive changes concerning the free flow of currencies. If this is possible, though trading in the affected currency will dry up considerably, it is still a manageable situation.

Leverage in forex trading requires a small initial investment, known as a margin, in order to get access to large deals in foreign currencies. In Foreign Exchange, low margin deposits or trading collateral are usually required (just as with regulated commodity futures). These margin policies allow for a lot of leverage.

Now, Margin calls, in which the investor is compelled to pay an additional margin, can happen because of minor price movements. When markets are volatile or risky, using too much leverage can result in significant losses that much outweigh initial investments. Traders should be mindful that using leverage aggressively can raise losses during periods of poor performance.

Counter-parties’ financial failure could result in significant losses. When trading Foreign Currencies on an OTC basis, the trader/customer will be dealing with institutions as principals, and institutions may suffer losses or become insolvent. In the event of a bankruptcy or loss, the trader may only be entitled to a pro-rata portion of all property available for distribution to all of the counter-clients, the party’s even if the property is explicitly traceable to his or her account.

Losses linked with foreign exchange trading may be bigger than initially projected due to a long list of risks. A tiny starting charge might result in large losses and illiquid assets due to the nature of leveraged trades. Additionally, time disparities and political difficulties can have far-reaching consequences for financial markets and currencies. Despite the fact that forex assets have the biggest trading volume, the risks are obvious and can result in significant losses.