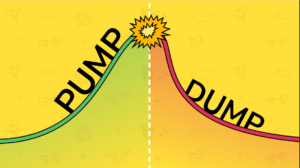 Crypto’s favorite scam is not just ubiquitous but also evolving to become more and more deceiving especially to those people who have no in-depth knowledge when it comes to trading crypto and just rely on the influences of celebrities and influencers.

A Pump and Dump scheme in crypto is a well-planned deception by influencers that involves duping investors into purchasing artificially inflated digital coins.

Educating oneself on the crypto ecosystem is critical for traders to pursue during a bear market while waiting for a bull market to begin. Having said that, understanding crypto investment requires keeping a look out for fraudulent initiatives that promise to drain assets overnight, also known as a crypto pump-and-dump scheme.

What is a pump and dump scheme?

Pump-and-dump in cryptocurrency is a well-planned deception that involves duping investors into purchasing artificially inflated tokens, which are generally pushed and publicized by paid celebrities and social influencers.

The SafeMoon token is one of the most visible examples of a purported pump-and-dump operation involving A-list celebrities such as Nick Carter, Soulja Boy, Lil Yachty, and YouTubers Jake Paul and Ben Phillips.

A pump-and-dump does not occur simply because a mass movement inflates the price of a coin.

During the pandemic, the price of Dogecoin – an altcoin that was created as a parody of digital assets but quickly accepted as a speculative investment – skyrocketed after Tesla founder Elon Musk, backed by social-media communities, expressed support for the token.

After the investors have purchased tokens at inflated prices, the persons with the largest pile of tokens sell out, causing the token’s prices to drop immediately.

While fraudsters conceal pump-and-dump schemes with the premise of generating the next generation of crypto billionaires, savvy investors have an advantage in spotting and avoiding their involvement. Just what happened to the hottest crypto news in the Philippines which involves a newly-launched crypto coin Lodicoin went down the drain.

Lodicoin began trading one hour earlier than previously reported, according to the Facebook page PH Metaverse, which has been monitoring the cryptocurrency since its introduction.

This appears to have given one user an advantage, allowing them to dump a significant amount of the coin, wiping away $9,000 from the liquidity pool in the process. This quickly prompted other early investors to liquidate in a panic.

The Process You Need To Watch Out

The pump and dump scheme is typically accompanied by misleading claims in three major categories: solving real-world use cases, ensuring excessive returns, and unwavering support from celebrities and influencers.

One example is this tweet coming from an American Rapper, Soulja Boy:

According to Carlton, the CEO of PinkPanda (a utility token for a finely crafted digital wallet), every crypto pump-and-dump scheme follows the same basic formula.

“The way they function is that they establish a token and want to elevate it as high as they can, so they go on social media and talk about what they’re doing, share memes, and get people onto their channel,” Carlton explained. “They start with CoinGecko, then CoinMarketCap, and each listing exposes them to a larger audience.”

Celebrities then sell the forged tokens to unsuspecting supporters, usually with great investment returns. In the instance of SafeMoon, celebrities were accused of a delayed rug pull, meaning a slow sell-off of holdings while retail investor trade activity remained inflated.

Binance, the largest cryptocurrency exchange by trading volume, has cautioned investors against adopting investment advice from celebrities and influencers through this tweet:

What to do to avoid it?

Although some people behind these schemes are already renouncing anonymity, anonymous founders are usually a red flag for some type of unlawful behavior or fraud.

“It’s still a signal,” Carlton added, “Because if someone won’t tell you who they are, they’re doing it for a reason. Ninety-nine times out of a hundred, it’s not because they believe in anonymity; it’s because they want to protect themselves from liability.”

If someone has exposed his identity, it’s highly recommended that advisers and investors conduct research on that person. This includes both digging up personal information and comprehending the token that the person is issuing.

As with anything financial, if it sounds too good to be true, it usually is. You should look for something specific: what is the value of this initiative, are they accomplishing their aims, and are they using their community to exchange valid and meaningful information rather than just pumping?

My Thoughts To You

It’s critical to recognize whether FOMO (Fear of Missing Out) is influencing your decision to invest in cryptocurrencies. It may appear that everyone is making money off of bitcoin or dogecoin, but this is not the reality.

The next step is to complete your research. People who understand coding can readily produce cryptocurrencies or tokens. Do some Google searches to discover more about a new coin that’s meant to make you rich.

Then there’s the issue of the hype that’s being created. Going into places where people are interested in cryptocurrencies, such as Discord channels, social media, and forums, is one-way scammers spread the news about their coin. Instead, check those groups that are sharing credible information latest updates with crypto.

Finally, if you still want to invest, don’t invest more than you’re willing to lose. It’s possible that an investor could profit from a pump and dump scheme with the appropriate timing, but it’s preferable to anticipate that the money you use to buy tokens will be gone forever.

After reading these kinds of schemes, now you are ready to start learning about day trading. Check out Martina’s Learn to Trade & Invest Crypto Academy platform to get access to a complete trading & investing video curriculum, trading resources, our trading community, e-mail support, and 2 Zoom lives with Martina every month. Try it out for 2 weeks 100% FREE!