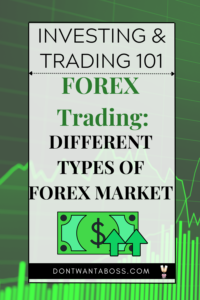 This is a continuation of the Foreign Market Exchanges topics I’ve written recently. I’ll write down the list of blog posts related to this topic, so feel free to click any one of these:

After discussing the major topics of Forex, let’s get to know the Types of Foreign Exchange Market (Spot Market, Currency Options & Futures Market).

Currency spot trading is the most popular foreign currency instrument around the world, making up 37% of the total activity.

The fast-paced spot market is not for the fainthearted, as it features high volatility and quick profits (and losses). A spot deal consists of a bilateral contract whereby a party delivers a specified amount of a given currency against receipt of a specified amount of another currency from a counter-party, based on an agreed exchange rate, within two business days of the deal date. The exception is the Canadian dollar, in which the spot delivery is executed the next business day.

The name “spot” does not mean that the currency exchange occurs the same business day the deal is executed. Currency transactions that require same-day delivery are called cash transactions. The two-day spot delivery for currencies was developed long before technological breakthroughs in information processing. This time period was necessary to check out all transactions’ details among counter-parties.

Although technologically feasible, the contemporary markets did not find it necessary to reduce the time to make payments. Human errors still occur and they need to be fixed before delivery. When currency deliveries are made to the wrong party, fines are imposed. In terms of volume, currencies around the world are traded mostly against the U.S. dollar, because the U.S. dollar is the currency of reference.

The other major currencies are the Euro, followed by the Japanese yen, the British pound, and the Swiss franc. Other currencies with significant spot market shares are the Canadian dollar and the Australian dollar.

In addition, a significant share of trading takes place in the currencies crosses, a non-dollar instrument whereby foreign currencies are quoted against other foreign currencies, such as the Euro against the Japanese Yen. There are several reasons for the popularity of currency spot trading. Profits (or losses) are realized quickly in the spot market, due to market volatility. In addition, since spot deals mature in only two business days, the time exposure to credit risk is limited.

Turnover in the spot market has been increasing dramatically, thanks to the combination of inherent profitability.

Volatility is the degree to which the price of the currency tends to fluctuate within and reduced credit risk. The spot market is characterized by high liquidity and a certain period of time. Free-floating currencies, such as the euro or the Japanese yen, tend to be volatile against the U.S. dollar.

On an active global trading day (24 hours), the euro/dollar exchange rate may change its value 18,000 times. An exchange rate may “fly” 200 pips in a matter of seconds if the market gets wind of a significant event. On the other hand, the exchange rate may remain quite static for extended periods of time, even in excess of an hour, when one market is almost finished trading and waiting for the next market to take over.

This is a common occurrence toward the end of the New York trading day.

Since California failed in the late 1980s to provide the link between the New York and Tokyo markets, there is a technical trading gap between around 4:30 PM and 6 pm EDT. In the United States spot market, the majority of deals are executed between 8:00 AM and noon, when the New York and European markets overlap. The activity drops sharply in the afternoon, over 50 percent in fact, when New York loses the international trading support. Overnight trading is limited, as very few banks have overnight desks. Most banks send their overnight orders to branches or other banks that operate in active time zones.

The bottom line is important in all financial markets, but in currency spot trading the antes (the amount of money that is demanded as payment for something) always seem to be higher as a result of the demand from all around the world. The profit and loss can be either realized or unrealized.

Currency options are unique trading instruments, equally, fit for speculation and hedging. Options allow for comprehensive customization of each individual strategy, quality of vital importance for the sophisticated investor.

More factors affect the options price relative to the prices of other foreign currency instruments. Unlike spot or forwards, both high and low volatility may generate a profit in the options market. For some, options are a cheaper vehicle for currency trading. For others, options mean added security and exact stop-loss order execution.

There are also misconceptions regarding the capabilities of options. In the currency markets, options are available in either cash or futures. It follows, then, that they are traded either over-the-counter (OTC) or on the centralized futures markets. The majority of currency options, around 81 percent, are traded over-the-counter. The over-the-counter market is similar to the spot or swap market.

Corporations may call banks and banks will trade with each other either directly or in the brokers’ market. This type of dealing allows for maximum flexibility: any amount, any currency, any odd expiration date, anytime. The currency amounts may be even or odd. The amounts may be quoted in either U.S. dollars or foreign currencies. Any currency may be traded as an option, not only the ones available as futures contracts. Therefore, traders may quote on any exotic currency, as required, including any cross currencies.

The expiration date may be quoted anywhere from several hours to several years, although the bulk of dates is concentrated around the even dates of one week, one month, two months, and so on. The cash market never closes, so options may be traded literally around the clock. Trading an option on currency futures will entitle the buyer to the right, but not the obligation, to take physical possession of the currency future.

Unlike currency futures, buying currency options does not require an initiation margin. The option premium, or price, paid by the buyer to the seller, or writer, reflects the buyer’s total risk. However, upon taking physical possession of the currency future by exercising the option, a trader will have to deposit a margin. Seven major factors have an impact on the option price:

1. Price of the currency.

3. Volatility of the currency.

The currency price is the central building block, as all the other factors are compared and analyzed against it. It is the currency price behavior that both generates the need for options and impacts the profitability of options. The impact of the currency price on the option premium is measured by delta, the first of the Greek letters used to describe aspects of the theoretical pricing models in this discussion of factors determining the option price.

The futures market transactions involve future payment and distribution at a previously agreed-upon exchange rate, commonly too as the future rate. The transaction or agreement is more systematic, ensuring that the transaction’s conditions are fixed in place and cannot be changed. Most of these trades on the Futures Market are conducted by traders who earn a regular return on their investments.

Here’s a 5-minute explanation about Futures Market that will help you understand it more clearly:

Forward Market works similarly to Futures Market, wherein a buyer and a seller both create a forward contract and they would deal in over-the-counter derivative instruments and agrees to take delivery at a specific price and date in the future. In addition, the contract can be adjusted in terms of fee, quantity, and deadline.