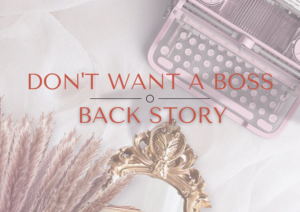 So I just wanted to talk to you guys today about some exciting news about our brand. If you’ve known Don’t Want a Boss for a while, you’ve read the “About Us” page, you kind of know my back story. And if you subscribe to any of our email lists, you’ll know more about my backstory.

In one part of my back story, I kind of went through a lot of financial issues at one point. My boyfriend and I spent a lot of time during this period as he wanted to spend more time together, and I was kind of very wrapped up in making my business work, I was just not cut out to be a mother yet and it was kind of not very nice and basically ended up there. He and I were fighting a lot, we weren’t getting along.

Eventually, I figured out how to make my business work. I stumbled on a strategy, I actually found an online book. I stumbled on his strategy and I realized what makes a business work, and what I really needed to do if you’re interested in any of that. You’re welcome to sign up for my VIP list and I will go through all of that there. I’ll tell you what the book is, and I’ll also tell you what this strategy has in many ways. That is a story for another day.

The point is, in that story, I’ll also tell you guys how after I figured out this strategy, then everything seemed to work.

And I finally started to make some money to pay off my dad’s lots and lots of debts. I was telling my boyfriend about it. And now, he started being really interested while I’m really paying off so many of his debts, like what’s going on? And then I started telling him more and more about it. I mean, initially, he was not really interested because it was not working and it was basically causing us fights. Then once it started working we stopped fighting, I started freeing up so much of my time because when your business is working, you actually spend way less time on it because it’s working! I mean, that’s always the case.

Every Business Has its Own Meaningful Back Story

Sometimes a business or working people tend to spend even more time on it because they’re like, “Oh, it’s working like him, so I spend more time. Maybe I can make even more money than I was before.” But I was actually not one of those people because I just really wanted to make it work to the point that I could pay off my debts, and this was all I could muster.

I add a goal for a certain amount of money per month that I need in order to pay off my debts and be like “just live the life that I wanted month by month”, and I included everything that I needed within a monthly budget, even including some funds, often it did meet a particular need, but I just chose a number on what it was like – this is how much money it is needed to make and how much that they make is already good.

So that’s how I built my business. And so when I achieved that number and I was reaching that number consistently, I actually could spend way less time. And then the time lost on my business translated to weighing more time with my boyfriend and our dogs. And it turned into a much better relationship, then he got really interested because he realized that I was getting all this money every month.

Initially, he hated online business, it’s stupid to him saying, “What is this?” “How is this happening?” It was really cool to see him like that. It was really even cooler when he started asking me more questions. And he actually wanted to have his own online business, then he became an instant Instagram influencer. He then started his own e-commerce store, he had a lot of fun with that, and then he started making money.

I was always more interested in e-commerce. But anyway, that’s another story! I keep getting sidetracked. Sorry.

My point was that when he started getting really into e-commerce, with Shopify, and because of that, he started realizing. He started looking more into the niches that he was interested in that had to do with shops, and what he was really interested in actually was kind of like the luxury niche, hobbies, and stuff like that. Kind of like cool knick-knacks like luxury, things like watches or bracelets, and jewelry. And things about hobby stuff like collectibles and stuff like that.

But also I started Don’t Want a Boss because I have literally been in the position where I’ve been in so much that and I have tried everything under the frigging sun and nothing has worked, it absolutely sucked, and I never want anyone to be stuck in that position again.

And whoever is stuck in that position, I want to be able to help them get the hell out of it. So anyway, he knows all about it, but then he was like, ”Oh well, Don’t Want a Boss is a kind of like a business. And it’s like it insinuates luxury. And you kinda like the economy. It’s kinda catchy, like, don’t want a boss, be your own boss, like be a boss.”

Working on your own time, building residual income and having financial freedom, doing whatever you want, or traveling the world. Then, I started making all these connections and decided that this was kind of part of my brand, and he’s like, “Why don’t we build a store around that kind of lifestyle?” and just doing “what you want” kinda vibe. And I was like, “That sounds like an awesome idea.” So then we did it. We put together the store. We started advertising, et cetera, and this is one way of advertising I guess.

But I really wanted to put a blog post about it because I wanted to share with you guys how we came up with the idea, and I want to share with you the really cool, cute backstory involved with it. That was even in the first place he didn’t even believe in online business at all, and he went from that to literally starting a store with me around this whole idea of teaching other people how to start an online business.

And it’s just really cool to see because it’s so rewarding after all the struggle that I went through with online business on my own for three years. Struggling to build something online on my own, to now be able to be doing it.

It’s also working with someone that I love, someone who initially was so against it because it was causing so many fights between us and it’s just so awesome to be able to have that shift, and for him to have grown so much so that now we can both live this lifestyle together, and helping people together to also get into this lifestyle of not having to be tied down to a job if they don’t want to and not ever having to feel obligated to go to a job for that paycheck anymore.

Anyway, we’re just starting, so we don’t have that many items, but if you would like to see anything else in the store, let me know and we will add and try to find products that will suit your needs, so I’ll be adding to the store all the time and will let you know how it goes. I’m so excited to be sharing this with you!

Hopefully, you can get to where I am, and you just need a little bit of help, because I know you could use all the help that you could get. And I just want to say that I am not one of those people that doesn’t even reply to emails because I’m “too busy or too important”. I am not really that important. I’m literally just you, a little bit fast forward into the future.